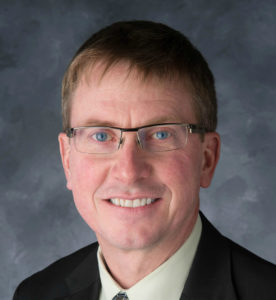 Larry currently serves as the Executive Associate Dean for the College of Engineering at the University of Iowa. Previously from 2004 – 2017, he served as the Director of IIHR – Hydroscience and Engineering, the United States’ oldest academic research program focused on hydraulics, hydrology and fluid mechanics. He was also the co-founder of the Iowa Flood Center, formed in 2009 as the nation’s only state-funded center focused on flood mapping, flood mitigation and flood-science research. In 2013 Larry co-founded the Iowa Nutrient Research Center the nation’s only academic center focused developing scientific understanding for the reduction of non-point source agricultural nutrient runoff. He is considered a thought-leader on water resources program development throughout the United States and around the world.
In addition to his professional work, Larry has passionately (perhaps obsessively) been working to restore an 80-acre property affectionately known as Old Man’s Timber. On this property Weber has reconstructed a 4-acre tallgrass prairie, moved and restored a circa 1890’s timber-framed barn, and implemented extensive forest stand improvement projects, including prescribed fire, weed tree removal, non-chemical control of invasive, built grade control structures and established an orchard and apiary. For this work, Larry and his wife Miechelle were named as 2014 Johnson County Conservationists of the Year by Bur Oak Land Trust (formerly Johnson County Heritage Trust), and 2015 Woodland Owners of the Year, State of Iowa, by the Conservation Districts of Iowa.