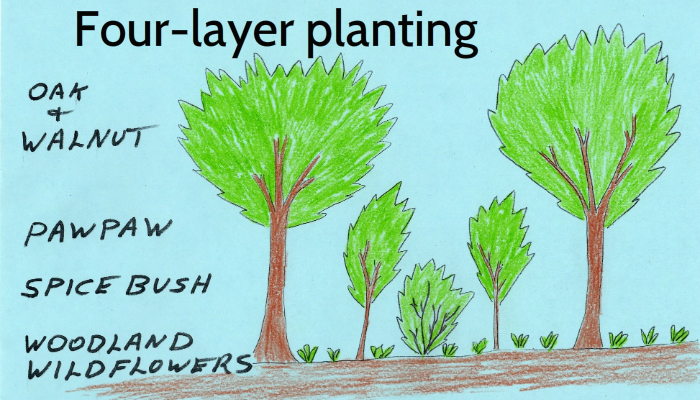 For the last half century, I have seen the habitat values of southeast Iowa steadily diminish, part of a process well underway before my time. Among the first to vanish entirely are the plants already rare, and the animals which uniquely depend on them. For example, in 1895, MacBride listed the pawpaw as being uncommon in southern Johnson County, and by 1918 it is not even mentioned on Brumfiel’s forest maps. Pawpaw leaves are the only food for the caterpillars of the zebra swallowtail butterfly and in 2007 the book Butterflies of Iowa finds only one breeding colony of this exquisite species in the entire state.

So in 2008 I began my home program to reintroduce three of the rarest species – the spicebush swallowtail, the pipevine swallowtail, and the zebra swallowtail, by developing a plantation of pawpaw, spicebush, sassafras, pipevine, and Virginia snakeroot, which are their obligate hosts. This plantation today covers about four acres, and all three butterfly species have already somehow found it within a couple of years. So here is “Highlights from Lon’s Rare Butterfly Project, 2015 Season.” This PDF also contains an introduction to my newer projects just launched, regarding habitat upgrades for hummingbirds and other rare butterfly species.