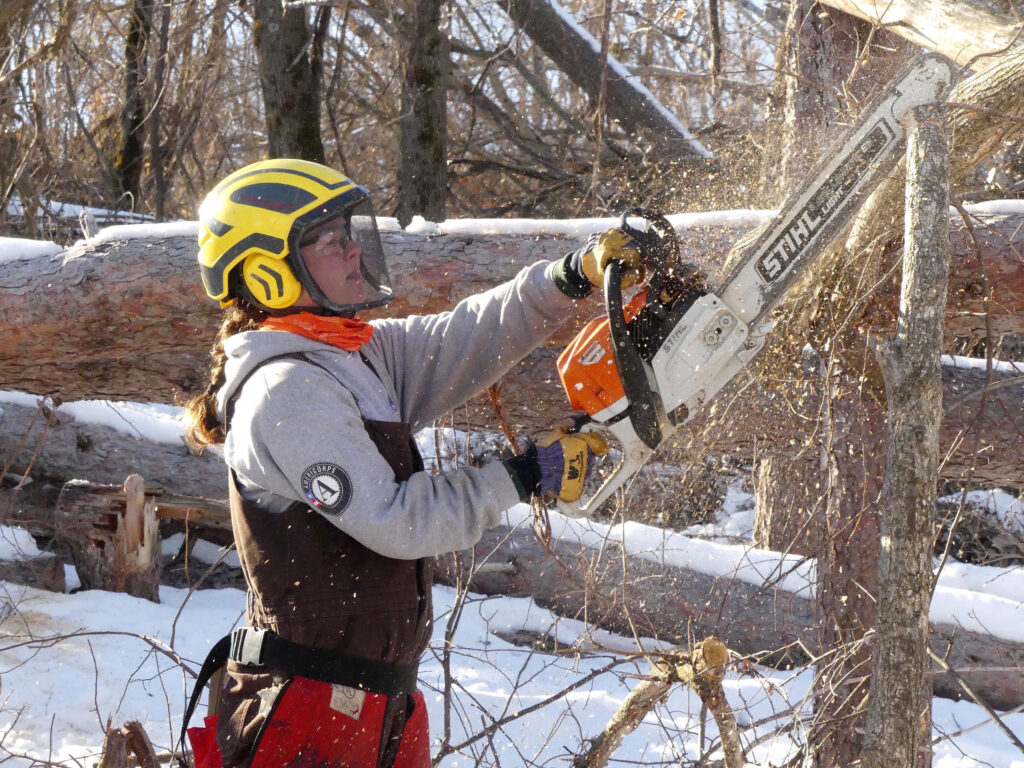 A 30-acre pine stand on the Meskwaki Nation Settlement near Tama was significantly damaged following last year’s derecho, an inland hurricane where winds reached up to 140 mph. Trees averaging 70 feet tall lay snapped among piles of branches and limbs in the woodland, and that’s where the Bur Oak Land Trust crew got to work.

The stand is part of the tribe’s nearly 300-acre bison refuge, home to a herd of 55 animals. Each year, 12-15 new calves are born and the tribe harvests around nine animals for meat. The herd size is at its maximum with three paddocks for the bison to roam around and two more planned. Forested area is needed to shelter the bison, but with so many trees down, the animals couldn’t make their way through the trees.

“It’s a nice little oasis out of the elements for them … so letting them back into the forests to get cover is important for us,” said Megan Volkens, Fish and Wildlife Branch Coordinator at Meskwaki Department of Natural Resources.

The department has a small crew available to do field work, so to make a dent in the project, Bur Oak stepped in Thursday with two staff and five AmeriCorps members to take down some hazard trees, cut up fallen trees and clear material into brush piles. The crew was also joined by Meskwaki Natural Resources Conservation Aide Stacy Youngbear.

“I am always proud of how efficiently our crew works together,” said Hannah Davey, AmeriCorps Land Management Crew Leader at Bur Oak. “As a team, we can quickly cut up and clear out impressive amounts of material. The Meskwaki Natural Resource crew can only do so much, so the additional nine people from Bur Oak made a considerable impact in just one day.”

Volkens echoed the same sentiment and said with the skills and large number of chainsaws Bur Oak has Meskwaki can “get a lot of work done with this kind of group.”

“We’re extremely grateful for this opportunity,” she said. “Land trust groups are awesome.”

The future of the pine plantation had been discussed for years. Stands of pines like the one at Meskwaki were planted across the Midwest around the time of President Franklin D. Roosevelt’s New Deal Civilian Conservation Corps. The plantings were part of an effort to restore land that was overworked or eroded from agriculture or grazing.

Trees aren’t only necessary to the landscape and bison habitat; they are also important to Meskwaki Nation, Sac and Fox tribe of the Mississippi. After the derecho, the U.S. Forest Service, in coordination with Iowa Department of Natural Resources, surveyed the forest. Volkens said the assessment revealed that half of the forest had been damaged by the storm, which was on the highest end of total forest destruction.

“That’s significant for the tribe,” she said, “because historically they are a forest or timber tribe. They came from the northeast, so forest is very important to the tribe.”

But the pine trees planted in the area aren’t native to Iowa, which created a dilemma for the Meskwaki Natural Resources Department. As a kind of silver lining to all of the destruction, Volkens said, the derecho helped clear the way for future plans.

“We’ll get in there, pile everything, clean it up and then plant bare root oak trees, hickory trees and any other desirable trees the tribe wants,” she said. “Kind of taking this random pine plantation that we have and bringing it back to a native forest.”

The restoration project is just beginning and Bur Oak plans to continue to offer assistance on the next steps. Volkens also suggested the project has opened the door for work on other forests on the Settlement.

“This is our second time volunteering at Meskwaki, but it certainly won’t be our last,” said Bur Oak Executive Director Jason Taylor. “We are excited to learn more about how they manage their land and look forward to working with their crew in the future.”