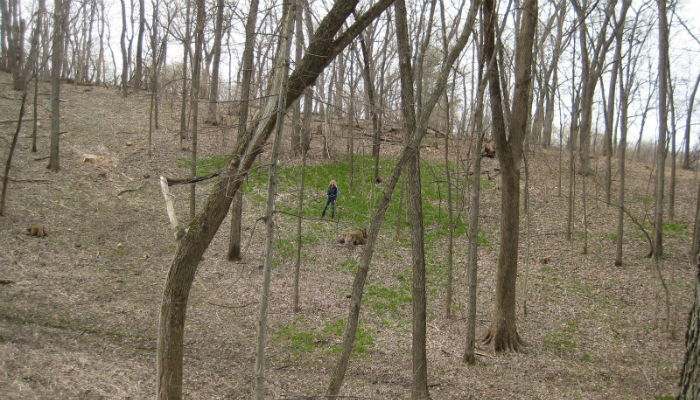 Following up on my last two blogs about how microclimates influence plants and animals, I also want to be sure you can recognize them because select microclimates can greatly improve the survival of your conservation plantings and can benefit wildlife. So here is a visible example on the side of a ravine in our woodlot in western Johnson County. The green sward is a dense stand of a little wild onion (Allium) species, which is up and growing in late winter long before any of our other ephemeral woodland wildflowers or weeds (and for scale my 5’8” tall neighbor is in the picture). This is where the snow melts first, the soil thaws sooner, and sometimes within a week of thaw the onion tips are already visible.

The conditions that make this a uniquely favorable spot includes the fact that the green area is a sheltered south-facing slope, while its immediate surroundings are less favorable.

Those unfavorable conditions include the slope above the green, which sees some winter wind eddying through the trees over the ridge crest, and in some years a little snowdrift even forms there. To the left of the green patch the slope curves around and becomes increasing east-facing and no longer catches maximum sunshine. To the right, the ridge crest drops away and offers less protection from the winter wind. The base of the slope sees a tiny amount of cold air drainage, and a lot of the snowmelt from above seeps out here and makes the soils too soggy for many spring ephemerals. Thus all four slides of this little green microclimate area are enclosed by less favorable growing conditions. These same onions also grow in scattered clumps around the rest of the woodlot, but only here do they get a jump start on the other understory species and outcompete them. This advantage only lasts until the tree canopy leafs out and then this microclimate fades away until the next winter.

I first started observing this green patch in 1972. The woodlot had been overgrazed in previous decades, perhaps for nearly a century, as this area was fenced with barbed wire. The onion leaves are not very palatable to livestock and combined with their ability to spread rapidly by bulblet offshoots, they likely rushed to colonize and dominate this most favorable microclimate – especially once the livestock were removed sometime before 1968.

This is just one example of microclimate observation, and by watching these microclimates cycle, you can learn the most favorable and unfavorable places to plant, and plan for the animals most likely to benefit from your efforts.

2 thoughts on “Microclimates III: How To Recognize Them In The Field”