One of the fascinations of nature is the design and construction of nests by birds. In Victorian times, it was a popular hobby to collect bird nests. Each species of our hot-blooded, feathered dinosaurs does something a bit different. And closely related species often build similar nests. For example, herons and egrets all build nearly flat platforms of slightly interwoven slender sticks placed in bushes or trees. A great reference to work on design and construction is the Peterson Field Guide: Eastern Birds’ Nests, which is organized with related species close together for easy comparison.

Children and adults can enjoy the challenge of making their own version of songbird nests, and one of the easiest nests to mimic is robin’s nest. Sticky dark mud can be formed into a shallow cup, and grass and fine twigs pressed into it. These can be dried on the windowsill, or in the oven set on a very low temperature. Look at a real robin’s nest for details, or lacking one, use a field guide.

One approach to giving form to grass/rootlet/fine twig-nests is to teach children how to crochet a cup shape from camouflage yarn. Then the fine vegetation can be added by either weaving it into the yarn or lightly gluing it on. Eggs can be made from colored modeling clay.

Birds salvage all kinds of fibrous material for construction, each species having its own specialty. This includes animal hair and fur. When I cut my beard, I put the trimmings out in the yard and sometimes find them again later woven into bird nests or mouse nests. Just out of curiosity, I made a couple of little nests from my beard, first cutting an old tennis ball in half and dampening it with glue: 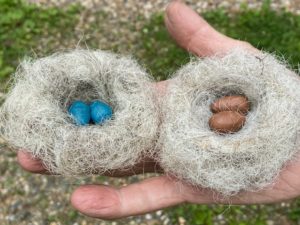 By midsummer, many species have fledged and abandoned their nests. Watch these nests for a week and if there’s no further activity, it is OK to remove them for study. But before removing, observe how it is attached. Some, for example, are cleverly woven around a fork in the branches. And often a horizontal leaf or two is just above the nest to shed rain and keep it out of sight of crows and blue jays.

Our native goldfinch does not begin nesting until midsummer, seemingly waiting until thistledown becomes available to line its nests. The young then have a frantic race to hatch, grow, fledge, and get sturdy enough to migrate during what is left of the summer.

One year I helped some Ecology students study songbird nest predation. We each chose one design and made numerous duplicates, which were deployed in different locations – high in the trees, low in shrubs, on the ground, in clumps of cattails, etc. These contained several pullet eggs (small chicken eggs), which had been stained various camouflage patterns, plus one or two clay eggs. The purpose was to learn whether airborne predators, like crows, were more destructive than terrestrial ones, like raccoons. The clay eggs were not eaten, of course, but the critters left their teeth marks, beak marks, and claw marks in the clay, which helped identify who had raided the nest (this was before the trailcam era).

The results included the situation in which each of us had inadvertently made a trail to each nest, and the predators quickly figured out it would lead to food. The raccoons could also smell the chicken coop on the eggs until we started washing them. So if you find an active bird’s nest, avoid going to it regularly or removing overhanging leaves to obtain a better view – you are just helping the predators.

I felt that I had received my accreditation as a songbird nest builder when I found a cowbird egg in one of them. However, the class was a spirited group and I am not confident it wasn’t a prank pulled on me.

The real purpose of building your own versions of birds’ nests is that it helps you become more observant of the natural world. For example, last year’s dead cattail seed fluff is now seen as this year’s hummingbird nest liner.

2 thoughts on “Nothing to Do? Try Building a Bird Nest!”