Skip to content
In early autumn, the Osage orange trees in our area become quite conspicuous, with their large and pale green fruits contrasting with the dark green leaves.

The species is also called the hedge apple, referring to the fact that before barbed wire became available, hedges of Osage orange were planted and used to confine livestock.

Its original native range is debatable, because before anyone came to document it, it was already in use for livestock fencing and being spread beyond its native area. At a minimum, it was native to east Texas in a hundred-mile-wide strip where the eastern forests were giving way to tall-grass prairie. Some authors think this strip extended northward into Oklahoma, and others believe the species was also originally scattered into Arkansas.

But once it was recognized to be an easily grown and durable living fence, the large fruits became an item of commerce and were shipped all over the country, especially to those portions of the Midwest lacking trees, where shelterbelts and windbreaks were also desired. By the 1850s it was growing coast to coast.

Barbed wire began to replace the tree for fencing in the 1870s, but the demand for shelterbelts and windbreaks continued in the dry middle of the country. For example, according to Lawrence Walker in his book titled, “Forests: A Naturalist’s Guide to Trees and Forest Ecology,” (1990, Wiley, p. 162) “In Kansas alone, between 1865 and 1939, farmers planted over ninety-six thousand miles of these protective strips, of which nearly forty thousand miles consisted of single row Osage orange hedges.”

These hedges served certain wildlife quite well. Quail for example, could slip in beneath the snarl of thorny branches and be sheltered from hawks, along with other small groundlings like frogs, toads, snakes and salamanders. Songbirds nested in the branches, and deer and coyotes sheltered behind them during winter storms.

In autumn, the fruits are hard and heavy and when you split them open they contain a milky pulp, which smells inedible, plus an abundance of little seeds: 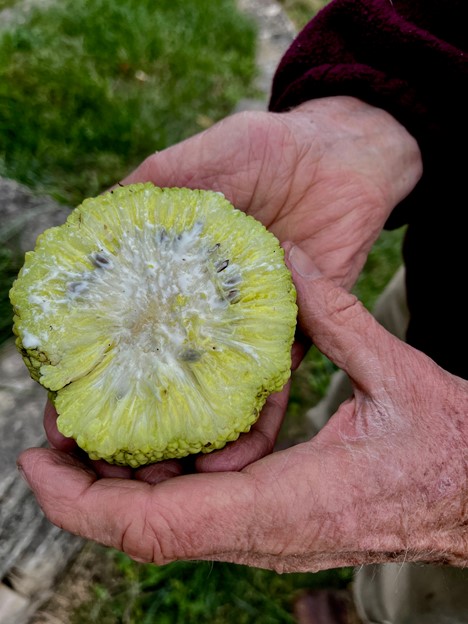 But during winter they gradually compost and the pulp turns to a brown mush. Then birds and squirrels tear them apart, and eat and scatter the seeds.
The wood of this species is especially strong and fibrous, and is bright yellow or orange color when freshly cut, fading to a soft brown when exposed to the air for a few weeks.

The Osage Indians discovered that the wood of this tree in their homeland was ideal for bows, and at the time of early European exploration they had a thriving trade, bartering ready-made bows for other tribal goods.

According to Donald Peattie in “A Natural History of Western Trees” (1991, Houghton Mifflin, p. 480-481), that travelling man Prince Maximilian found Osage orange bows amongst the Blackfeet of Montana obtained by barter. The Arikaree Indians of North Dakota traded a horse and a blanket for an Osage bow in 1810.

These were buffalo-hunting bows, very short for maneuvering on horseback while at full speed. Only a strong man could draw an arrow on one and most tribes seemed to have a couple of guys who had put an arrow completely through a bison.

The early French explorers called the tree bois d’arc, which translates to, “wood of the bow.” When spelled phonetically into English, bois d’arc became bowdark. Historically, Europeans had favored English yew for longbows, but when bowdark became available many archers switched over to the American wood. And it is fantastic firewood if you can handle it. It is very hard, very dense and difficult to split, but essentially the equivalent of anthracite for heat value.

My neighbor went after a dead Osage orange trunk with a dull chainsaw and nothing happened, the saw just bounced against the wood. You need to sharpen your chain often.

So even though it is a weed in the restoration of a native woodland or prairie here, it is an interesting and useful weed.