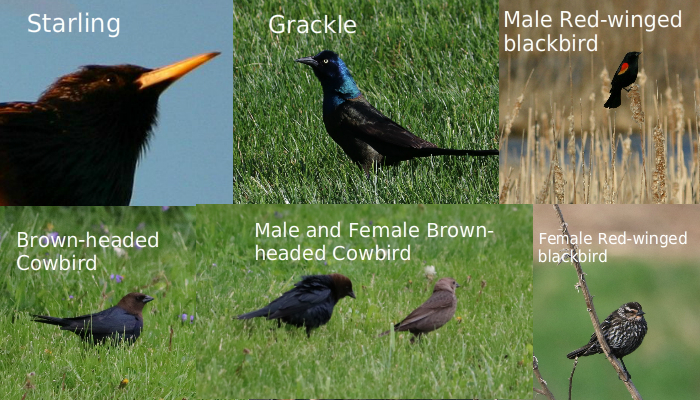 People often mention the “blackbirds” that descend on their backyard feeders, generally with irritation at their gluttonous behavior. Further questions, though, lead to confusion. Did the perpetrators have yellow bills or black? Were their heads shiny and iridescent, or plain black (or maybe even brown)? Long tails or stubby? At some point the answer to each of those questions has been “yes.”

So who are some of these “blackbirds” you may encounter?

#1. The European Starling (Sturnus vulgaris). The city bird. Almost universally reviled as an aggressive non-native who pushes out less boisterous birds.
Identifying features: Longer yellow bill. Stubby body with very short tail; iridescent sheen throughout. Plumage appears white-speckled in the winter. Males and females are similar in appearance. A chatterbox with a wide repertoire of clicks, whistles and whirs interspersed with occasional mimicry.

#3. The Red-winged Blackbird (Agelaius phoeniceus). The surreptitious sidler. Often hides his distinctive red epaulets when visiting birdfeeders outside his territory to keep the peace.
Identifying features: Flat black body without iridescence. Scarlet shoulders above a yellow border. Heavy black bill (shorter and heavier than both the starling and the grackle). Females look very different, streaky brown instead of black. Not as likely to be seen on the ground as the other three blackbirds.

4. The Brown-headed Cowbird (Molothrus ater). The deadbeat dad. Lets other birds raise his kids, so he gets to keep all that sweet, sweet seed for himself.
Identifying features: Brown head (imagine that!) with a glossy black body. Compact build with a shortish tail. Heavy conical bill. Females a nondescript brown all over.

Hopefully you can now identify your blackbird neighbors by name! They each have their own unique and interesting traits and are well worth getting to know as individual species.

2 thoughts on “What Blackbird Do You See?”